Photonwares produces net-ready Optical Line protection (OLP) switches uniquely featuring ultra-fast switch (<100ns) so that minimum data will be lost in the event of a fiber link failure. OLP enhances and secures the reliability of an optical network by using two routes in which one is active and another a redundant standby fiber line. OLP is used in pairs with two identical units, one at each end of the optical network transmission line. It has optical tap detectors constantly monitoring the optical power of the data transmission. In case the optical power inside the active fiber gets lower than a user-defined threshold, the OLP automatically switches the link to go through the standby fiber, restoring the communication and services. The standby fiber line is also constantly monitored to make sure its integrity by using a build-in testing laser of different wavelength that is launched into the standby fiber and its intensity is measured with additional detectors at the other end. In case the optical power inside the standby fiber gets lower, the OLP sends warning signals till the problem is fixed.

Photonwares provides two types of line protection: 1:1 and 1+1. 1:1 is a newer version has a low insertion loss less than1.5dB, while 1+1 is a legacy design has a high loss exceeding 3.5dB. Traditionally, 1+1 is lower cost, but we now make both the same cost due to the advancements in switches. Wavelengths and connectors can be customized to meet special control and applications. We further offer built-in amplifiers for long-distance links. The device is available with a standard 1U rackmount with up to four Pluggable Modules. A special rack with a large number of pluggable modules is also available.

The most commonly used OLP is OLP 1:1, as shown in the diagram below, consisting of the main fiber route and a standby fiber route between the two sites and associated fiber optical switches. In normal operation, the data are transmitted and received through the main route. Inside OLP, detectors are incorporated at Rx ports to detect the decreasing of the optical power. When a fault is detected on the main route, the system will switch both the transmitting and receiving from the main route to the standby route. The advantages of 1:1 OLP system are low optical insertion loss, and the optical fiber for the backup path can also be used for other business. 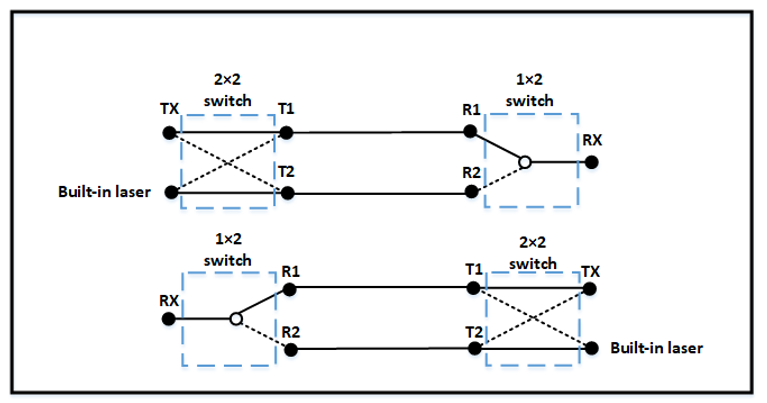 OLP 1+1 is shown in the following diagram, in which the optical power from Tx is split into two with a ratio of 50:50 and transmits through both main and standby routes. While for Rx, the optical signal with better quality will be selected when a fault is detected. The advantage of OLP 1+1 system is less optical switching. However, there will be larger insertion loss compared with the OLP 1:1 system.

There are no reviews yet.